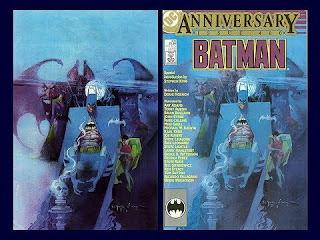 I'm an immense Batman fan. I wear Batman garments, I talk about Batman to my better half (she gestures, and professes to mind), I even make YouTube recordings about Batman. That being stated, I am frequently frustrated in a portion of the Batman comic books that I read. A ton of times, the narratives are re-hashes of old stories, coming up short on any actual plot, or outright exhausting.

Issue #400, in any case, had none of these defects. It was an extraordinary perused from start to finish. The exceptional presentation by Stephen King, shockingly, was great as well. I state 'shockingly' not as a result of any absence of confidence in Stephen King's composing capacities, but instead because I typically abhor presentation, considerably more so if they are named 'exceptional.'

I read the entire issue and delighted in each snapshot of it. Alright, to be straightforward, there were a couple of times when I wanted that Jason Todd would drop dead, however, other than that, it was an incredible story.

I'll quickly run down the storyline:

All the major (and a portion of the minor) convicts in Gotham City are sprung from prison and Arkham Asylum. Nobody knows who the driving force is behind the jailbreak, not by any means the liberated detainees.

It ends up being Ras Al Ghul and he offers to assist Batman with catching and murder every one of the mavericks if Batman will consent to be his accomplice and assist him with administering the world.

Batman says 'No,' and the fight lines are drawn. It's the Caped Crusader, Robin, Catwoman, and Talia versus virtually every other person.

The Joker, Penguin, Poison Ivy, Killer Croc, and the Mad Hatter have the most significant influence in the story, with a couple of different scoundrels sprinkled in to include enhance. For instance, Catman shows up. Luckily, he rapidly leaves arrange right.

At the point, all things considered high vanquishes malevolence, and Batman has all the earmarks of being reawakened, recharged, and prepared to battle malicious once more. Ras Al Ghul is murdered, yet it's a given that he will be revived and show up again, later on, to add insult to the Dark Knight.

Something I didn't care for about this issue was the work of art. Since it was an exceptional commemoration issue, 20+ artists chipped away at the inside craftsmanship. This implies that each couple of pages, the workmanship would abruptly move and take off toward another path. This annoyed me. It resembles viewing a motion picture that continues changing from shading to highly contrasting and afterward back once more. Simply give me one craftsman and one author, and I'm great. Toss in a decent colorist, and I'm extraordinary.

I guess I should make reference to now that Doug Moench composed the issue. Whoop to him...

On the off chance that you haven't read this issue yet, it's certainly justified regardless of the $1 or so you can most likely lift it awake for nowadays.

With everything taken into account, I give it 4 out of 5 stars.
Posted by Shakir Hussain at 04:46