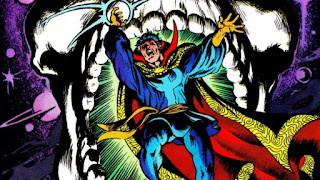 Batman got acquainted with his chief foe Joker in the entire first issue of the comic book, and the subsequent story puts Dr. Abnormal in the blend.

The issue begins with Dr. Hugo Strange, who is placed in jail by Batman himself, getting away from his present situation in existence with a few different detainees. He likewise goes to the crazy refuge and breaks out two or three more haven detainees. Batman gets a breeze of this, and even before he starts to research, the town is assaulted by mammoth beasts.

Regrettably, the cops discover that these beasts aren't harmed by slugs as well. What sort of crazy risk is confronting the city now? All things considered, Batman chooses to discover the response to the inquiry that must have doubtlessly trimmed in each peruser's psyche.

Batman observes the goliaths laying the town waste and afterward tails them to their sanctuary, just to be caught by monsters, who are none other than Dr. Hugo Strange's creation. Dr. Bizarre uncovers that he has made a mixture that enables men to develop arrogantly. Also, as they release devastation on the city, his different flunkies intend to loot banks. Make roughage while the sun sparkles, as it's been said.

Batman is wrecked, and Dr. Weird infuses Batman with a similar serum and locks him up. Yet, the Caped Crusader wakes up in the nick of time - a couple of hours before the serum would deal with him - and gets the chance to work. Since the baddies removed his tool belt from him, Bat needs to depend on the synthetic concoctions he has in his boot heel to impact through his improvised jail. He, at that point, clobbers Hugo and astutely vanquishes every one of the beasts that are in Hugo's refuge.

Bat, at that point, takes his bitplane and gets rid of the truck that was conveying the beasts, just as the individuals who were wanting to use up every last cent. While nothing is told about the serum chipping away at Batman, we are accepting Bat went to his cavern and unraveled the issue for himself.

The second story in the Batverse acquaints us with Hugo Strange, who shows up in the DC Comics Game, Injustice: Gods Among Us as well. Hugo is likewise a focal character in the Batman: Arkham Origins game.

Once more, this story takes the ordinary 'crazy lab rat' course and is confirmation of how therapeutic science was as yet an extraordinary secret, and accordingly,, a dread to the overall population.

In this issue, Batman proclaims to slaughtering in any event three individuals, which is a long way from the 'promise of not murdering.' This equitable goes to state how funnies have developed through time.
Posted by Shakir Hussain at 03:36