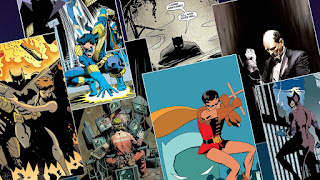 Being a Green Lantern fan that I am, I purchased and read Green Lantern The Greatest Stories Ever Told and was fulfilled by the narratives in it. So I figured I should get JLA The Greatest Stories Ever Told. JLA represents the Justice League of America, in some cases referred to just as Justice League. JLA or Justice League of America is a comic book distributed by DC Comics. It is a hero group contained DC's most celebrated names like Superman, Batman, Wonder Woman, Flash, Green Lantern, and the rundown goes on. The program isn't changeless. Now and again, a few individuals leave while new characters join. The comic book had been engaging its perusers since the sixties as of not long ago.

So JLA The Greatest Stories Ever Told is an arrangement of a portion of the group's most prominent stories or experiences. Even though I would need to state that the expression "most noteworthy" is emotional, despite everything, I found my approach to value this comic book aggregation.

I surmise one of my greatest desire from this book is perusing the first issue with which this group or gathering of superheroes meet up and turned into a group. I'm discussing The Brave and the Bold #28 from 1960. I would genuinely love to peruse that unique story. The group's starting story that was remembered for this book was from issue #200 with the title "Beginning." It was an account of how its establishing individuals meet up to fight attacking outsider powers and officially build up the gathering.

Indeed, the low starting point story cleared a path for different pages wherein fascinating stories fill in. Stories like "The Super-Exiles of Earth," "Snapper Carr-Traitor," and "The Great Identity Crisis," among others. Every one of these accounts (eight stories altogether including "Cause"), had some critical occasions in the long history of the group which included uncovering every part's mystery characters to each other, selling out from one of its individuals, defeating their very own selves, experiencing progress with its new individuals, and regarding the guidance that may be the way to sparing the world from all-out outsider mastery.

Among these accounts, I surmise the best that I've perused was "Star-Seed." It was initially exhibited in JLA Secret Files #1, September 1997. The story was composed by Grant Morrison and Mike Millar. In the story, Blue Valley was assaulted by an outsider danger. The streak was first to address the circumstance; however, he was likewise among the first to fall under the intruder's control. Superman assembled a conference with Batman, Wonder Woman, Aquaman, Green Lantern, and Martian Manhunter as the outsider intruder's made it open that they are up to vanquish the world. During their arranging procedure, The Specter mediated and cautioned them from getting included. The superheroes were in any case

Hesitant to pursue the spontaneous guidance so the Specter gave them a perspective on things to come should they finish their arrangement. The aftereffect of their activity would be them falling under the influence of the outsider risk. Also, being the super-fueled being that they are, the remainder of the world were no match to them. Seeing the likely result, they had concocted an answer: entering through the adversary domain denied of their superpowers. With their forces gone, they would be a lesser risk should they, in reality, fall leveled out. In spite of being feeble, the gathering prevailing with regards to quelling the outsider danger, keeping the world safe once more.

Once more, there are eight stories in this aggregation book, and every story offers an alternate take and perspective (as deciphered by every story's separate inventive authors) in the lives of these incredible superheroes. Besides the extraordinary stories, like comic books, every story likewise exhibited incredible craftsmanship from incredible specialists that had common their gifts on each page.

Green Lantern is my untouched most loved hero. So kindly look at my own blog, where I highlight anything Green Lantern related.
Posted by Shakir Hussain at 04:20